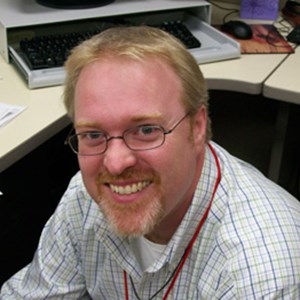 Clark began his career as a bookseller at Vroman’s in 1987 at Vroman’s Arcadia. In 1993 he transferred to Vroman’s accounting department in Pasadena where he held several positions including Accounts Receivables, Systems Administrator and Assistant Controller. In September 1994 he completed a Business Administration degree with an emphasis in accounting and a history minor from California State University Los Angeles. In 1996 he left Vroman’s to accept the Accounting Manager position for Book Soup and Book Soup Bistro in West Hollywood while it was still owned by Glenn Goldman. At Book Soup he was promoted to Controller after he successfully consolidated the accounting teams of the bookstore and restaurant. In 2002 he accepted a Controller position with Kovel/Fulller, an advertising agency based in Culver City, where he oversaw $22M in billings per year. Clark returned to Vroman’s in August 2002 as the Controller. In 2006 he took on the added responsibilities as the company’s corporate secretary and in July 2007 he became the company’s CFO and a minority shareholder. In January 2020 he joined the board of directors for the company. In addition to being responsible for all finance and accounting activities, Clark directs the IT and HR areas of the company as well as overseeing the company’s archive.

Clark has served on the board and as treasurer for the CSULA Alumni Association and Heritage Square Museum. He also served as chair of the scholarship committee for CSULA Alumni Association for two years. He is a leader in Glendora Cub Scout Pack 490 & Glendora Boy Scout Troop 483. Clark was a member of the San Marino One City, One Book committee in 2007-2008. He also served as a volunteer financial consultant to the board of the Southern California Independent Booksellers Association in 2001. Clark was a panelist for the 2008 SCIBA Spring Forum, 2013 SCIBA Fall Trade Show and 2014 ABA Winter Institute. Clark has also served on the ABA ABACUS committee multiple times.